Some things I'm wondering about...

Do you get 'hangry' when you are alone? You know, the linuistic mashup of 'hungry' and 'angry'... I've always found that hanger is triggered when another human comes into the picture. Hmmm...

Is there an etiquette guide, a guide which I can forward to everyone who forwards stuff to me, about what to forward - about why forwarding everything you get - including the obviously fake news, the funny fake stuff and the rest - without some kind of a filter - is not so great? Is there an "Internet Guide to Forwarding" course one can take?

All the wondering has also led to creating/hacking/copying. I'm on a roll - drawing and making and tapping and coding. I, now, have my work productivity figured out. And my Seasonal Spring Making Energy (SSME) is fully topped up. And before it will fade away by summer, I'm cooking up all kinds of things on all my six burners...I'll share some of the stuff next time.

Some links for you this week.

This excellent article by Yuval Noah Harai of Sapiens fame, on a vision for the world after the coronavirus.

Don't forget to enjoy the photographs.

"The images accompanying this article are taken from webcams overlooking the deserted streets of Italy, found and manipulated by Graziano Panfili, a photographer living under lockdown"

Neil Parischa in conversation with Shane Parrish talked about how he categorizes the things he hast to do, and how he does them. He uses a 2x2 four-quadrant matrix - regulate, automate, debate, effectuate.

As I go through my day, I keep wondering in which quadrant a given task falls. Here is my drawing of the matrix: 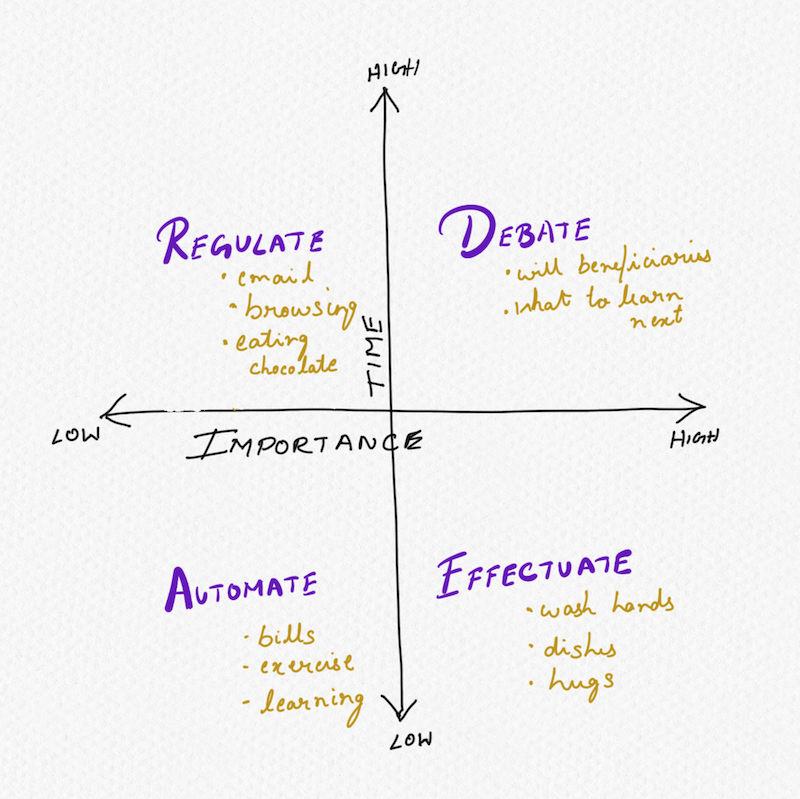 Imagine this. You set an alarm on your smart watch at night.

In the morning, at the ungodly hour of 6.don't-wake-me-up am, the phone starts vibrating and buzzing and annoying you like a rattlesnake. You cannot stop this alarm. You cannot snooze it. You can smash your phone with your hammer.

Or, you can get out of bed, and get your heartrate up to 90bpm (or whatever you set it at). You keep it at that for a full minute. Then and only then it turns off.

That would mean I would have to roll out of bed and race up and down stairs for a minute - or do jumping jacks or pushups - or something.

Now that the alarm is off, I can go back to sleep... but the feel-good-chemical stuff in my bloodstream wonders why I would want to do that - now that I'm fully awake.

So, do you know of such an alarm app? Let me know!

5. Spurious Correlations - Apple iPhones make other countries buy Uranium from the US

Did you know that the more iPhones Apple sells, the more other countries want to buy Uranium from US? Here is the chart:

Or is it? This is an example of a spurious correlation. It appears, from the data that iPhone sales somehow track Uranium exports right? However, can you say that the one causes the other?

In today's age of infographics and charts which all seem to make sense and show something, my old professor's voice keeps ringing in my head: "Correlation doesn't mean causation".

"Just because it looks scientific, doesn't mean it's accurated".

"Just because someone forwarded it to you, doesn't mean it's true."

And here is a beautiful letter written by Scott F. Fitzgerald, which someone forwarded - about his time in quarantine during the Spanish Flu of 1918-1920, complaining about how Ernest Hemingway didn't like to wash his hands.

It was a limpid dreary day, hung as in a basket from a single dull star. I thank you for your letter. Outside, I perceive what may be a collection of fallen leaves tussling against a trash can. It rings like jazz to my ears. The streets are that empty. It seems as though the bulk of the city has retreated to their quarters, rightfully so. At this time, it seems very poignant to avoid all public spaces. Even the bars, as I told Hemingway, but to that he punched me in the stomach, to which I asked if he had washed his hands. He hadn’t. He is much the denier, that one. Why, he considers the virus to be just influenza. I’m curious of his sources.

The officials have alerted us to ensure we have a month’s worth of necessities. Zelda and I have stocked up on red wine, whiskey, rum, vermouth, absinthe, white wine, sherry, gin, and lord, if we need it, brandy. Please pray for us. ...

Except, of course, it's all fake. Scott Fitzgerald did not write it. In fact, it was a [parody by Nick Farriella}(https://twitter.com/nick_farriella/status/1240123869303889921) which, of course, people thought was a real Fitzgerald piece!

when you write a parody for @mcsweeneys and it gets turned into fake news: https://t.co/nBNpiYiQYL

Written on this day, the 29th of March, in the year of our Lord, the turtle.

This was Issue #11 of the Year of the Turtle. You can see all the past newsletters on this website.